This article seeks for a deeper understanding of the meaning of the energy and ecological transition, within the series of Challenging Questions arising throughout the Lightness Project. In this project, Energy communities not only raise questions about what they are and how they operate, but also point to their purpose and role in the necessary change in the energy system.

The word transition not only points towards a destination, a future scenario, but also the origin, the place where one begins and wants to leave behind. To define a transition, therefore, is to construct one of the possible paths for change.

For this reason, now that the term has been established in the European political agenda and there are even laws and ministries that are called ‘energy transition’ or ‘ecological transition’[1], it is a good moment to clarify some concepts and signposts that guide the way, for example the adjectives that are used to describe the transition.

In the first place, it is important to note that when we talk about energy transition, we are referring to a change in the energy model. However, when we use the term ‘ecological’, we are usually referring to the transition itself. In other words, it is a reference to the transformation process itself, whether it be the energy model or greenhouse gas emissions, as could be the case in regards to climate transitions.

For this reason, an energy transition may not be ‘ecological’. It is possible to find energy transition proposals that do not take into account an overall ecological framework. Renewable energy sources form a part of the energy transition path, but they do not always meet the requirements of a ecological transition, which requires keeping in mind other criteria such as conservation of biodiversity, occupation of fertile soils, or pollution that is generated throughout their life cycle.

Energy communities are, in this sense, a very interesting contribution to bring the energy transition closer to ecology, insofar as they are usually based on the implementation of renewable energy sources on buildings, or artificialized land, or spaces that do not lose their ecological functions with irreversible installations. 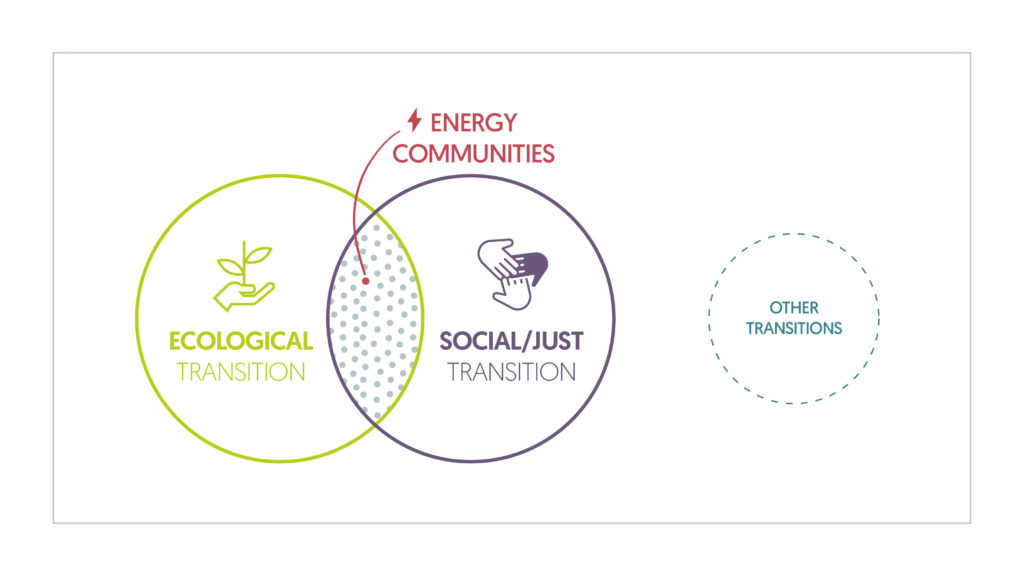 There is also not a direct correlation between energy transition and adjectives such as social, justice, and democratic. An energy transition can be socially unjust and reinforce undemocratic power structures and oligopolies. It can be a difficult road for some social groups while benefitting those who are more privileged; or it can help everyone reach the goal on an equal footing. It can concentrate power and wealth; or alternatively, it can favour the redistribution of opportunities. It can turn the population into remote customers of the energy resource or, on the contrary, stimulate citizen participation and a global understanding of what it means to generate energy.

The European Green Deal, the European Union’s road map to responding to environmental and climatic challenges, asserts that ‘the transition can only succeed if it is conducted in a fair and inclusive way’[2], avoiding that those sectors and regions most dependent on fossil fuels are left behind.[3] However, it will also require the overall policies of the European Commission to facilitate participation and democratisation with regard to key economic decisions and resources.

In this sense, energy communities are also a great tool to provide a path towards an energy transition that takes into account the social components of equity and the democratisation of access to resources. The local character of energy generation and consumption that these energy communities offer, fosters citizen participation and decision-making beyond the pure laws of the market or profitability in purely monetary terms.

In conclusion, transitions are paths that need to be chosen carefully, not only to guarantee that one arrives at the envisioned destination, but to assure that the journey includes the desired social and ecological scenarios. The path to energy transition matters.

StoryTelling: a creative method to engage